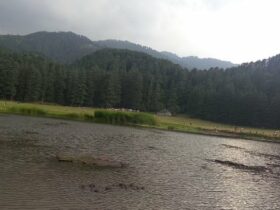 Give yourself and your family a break from your monotonous life and engage yourself in the rich history that our country holds. If you are a lover of history and can spend hours staring at the precious, ancient relics from historical periods, then Old Fort or the Purana Qila is the perfect place for you.

When Humayun came into power, he wanted to build his own city. So, he chose the site where once the Pandavas had their capital, Indraprastha, and started building the fort. Soon before its completion, Humayun was defeated by Sher Shah Suri who fortified the citadel and made changes into it. He also strengthened the walls of the fort and built some additional constructions inside the fort. He also built another fort called the Shergarh.

After Sher Shah Suri’s death, the Hindu King Hem Chandra Vikramaditya was crowned. Later on, during the Partition of India, it was used by the Muslim refugees as a shelter, under the management of the India Government in 1947.

You may also like 22 Popular historical places in Delhi

The Architecture of Old Fort

With walls built to a height of more than 18 meters and three magnificent gateways, arched in style and named as Bara Darwaza or the west gate, the Humayun Gate, as Humayun built it, and the third gate is known as the Talaqi gate or the forbidden gate. Decorated with white marbles and blue tiles, the gateways are made with sandstone and are double-storied.

There are detailed work of ornating and carvings on the walls and has numerous overhanging balconies. There are also many chhatris seen in the structure, which is an iconic example of Rajasthani Architecture.

The Qila-i- Kuna Mosque was built by Sher Shah Suri and is made from red marbles. Marbles in shades of red, white and grey are also used to inscribe writings. The construction has extensive use of pointed arches. There are horse-shaped arches on all its gateways.

Situated just at the backdrop of the ancient fort is a lake that is dotted by numerous green shrubs and plants. Boating is an adventurous thing to do in the lake. The view that it offers is genuinely spell-bounding.

It is a popular tourist spot and families can often be spotted peddling on the sparkling blue water of the lake and relaxing. The charges are inexpensive and nominal and thus cater to everyone’s desire.

The entry fees for travellers from the country are Rs 20 only. The charges have been kept at a minimum and thus are affordable. The entry fee for foreign travellers is Rs 200.

The Old Fort or Purana Qila remains open from 7.00 AM in the morning to 5.00 PM in the evening and is open throughout the week. Tourists can visit this place any day and experience the rich historical culture that it holds.

The best time to visit the Old Fort is during the winter. From the months of November to February, the weather remains favourable and pleasant for sightseeing. During this time, tourists flood to the Old Fort to witness its ancient history.

Monsoon and summers are not recommended as Delhi gets too much heat and rainfall.

How to Reach Old Fort

If you are travelling by air, then you can board any flight from your city to New Delhi. After reaching the airport, you can take a private cab or taxi. You can also take a ride on the capital city’s metro.

Metro is the most convenient way to reach the Old Fort. You have to board the metro, and the nearest station is Pragati Maidan.

There are numerous buses and cabs that make to and fro trips to the Old Fort. You can hire a private taxi and reach the destination.

You may also like Raj Ghat Timings, Entry Fee, History, Nearby Tourist Attractions

Places to Eat Near Old Fort

Being one of the most popular destinations of Delhi, Old Fort is visited by numerous tourists every day. There are many eating places near the iconic building. You can choose from Subway, Mustard’s Leaf, Mc Donalds, Veranda Cafe, The Red Rocker Inn, etc. There are options for vegetarian foods too.

Also read 15 Beautiful lakes in Delhi that you must visit

Places to Visit Near Old Fort

One of the popular tourist destinations of Delhi, the National Zoological Park is located near the Old Fort and spans an area of about 176 acres. It is home to about 130 species of animals and birds and 1,350 animals. There are numerous enclosures for different animals like chimpanzees, white tigers, spider monkeys, etc.

India Gate is a war memorial located in New Delhi, built as a memorial to the 70,000 British Indian Soldiers who died between 1914 to 1917, fighting the First World War and the Third Anglo-Afghan War. Built-in an arch style, the India Gate represents triumph over anarchy.

Built-in 1569-1570, Humayun’s Tomb is the tomb where the remains of the Mughal Emperor, Humanyun, lies. It was built by Persian architects and constructed under the order of Empress Bega Begum, Humayun’s first Wife.

Declared as a World Heritage Site by UNESCO, the tomb has numerous smaller monuments that lead the path to the main tomb.

One of the iconic and historic forts of India, the Red Fort served as the residence of many Mughal Emperors. The Prime Minister of India hoists the National Flag every year from this fort.

With a high level of ornamentation, Red Fort boasts of the excellent work from Persian, European and Indian culture. The magnificent Barrel Vault is thought to have served as a market, exclusively for the Mughal women residing inside the fort who were prevented from going out.

You may also like
Damdama Lake Timings, Entry Fee, Boating, Nearby Attractions
14 Fun Places To Visit in Delhi with Family and Kids
A Complete Guide To Agrasen Ki Baoli – Timings, Ticket Price, History

Who built the Old Fort?

Old Fort was started to be constructed by the Mughal emperor Humayun, but he couldn’t finish it. Later on, it was built by Sher Shah Suri in the 16th century. With a height of about 18 meters, the fort spans an area of about 1.5 kilometres.

Why was Purana Qila built?

Legends say that the great Mughal Emperor Humayun wanted to build a city of his own. Thus, he started to build a fort at the site of Indraprastha, where Pandavas capital was said to have existed.

How can I reach Purana Qila by Metro?

If you are travelling on the Delhi Metro, you can reach Purana Qila. The nearest stop to the Old Fort is the Pragati Maidan. Once you reach the station, you can see the exit gate number written on the walls, and you can follow accordingly.