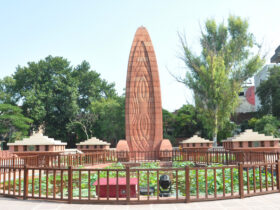 Travelling is one of the most refreshing things that help you feel relaxed as well as rejuvenates you with positivity. When monotonous life holds you back, there is no other escape better than packing your bags and getting out on a journey that you will relish forever. Read on to know about the best places to visit in Kolhapur.

Popular Places To Visit in Kolhapur

Located in the southwest part of Maharashtra, Kolhapur is a small town that attracts numerous tourists every year, owing to its historical and natural heritage. Famous for its signature shoes and jewellery, Kolhapur not only is a place of historical importance but also is a centre for a rich industrial economy.

Located on the banks of the Panchganga River, Shri Mahalakshmi Temple is one of the most famous Hindu temples in India. The temple is dedicated to Goddess Ambabai and was built during the Chalukya reign.

The temple boasts of an idol that is made from precious stones and jewels and weighs about 40 kg. There are other shrines and sculptures present in the premises of the temple that dates back to the 11th century.

More than a thousand years old ago, it is astonishing to believe how the craftsmen built the temple with such perfection that during sunset the sun rays fall upon the feet of the goddess and it seems like it pays homage.

Temblai Temple has located just at a distance of 6 km from Shri Mahalakshmi Temple. Goddess Renukadevi is worshipped in this temple. It is assumed that Renukadevi and Mahalakshmi were sisters and devotees built the temple later on. The idol worshipped her has four hands and is made from black stone.

The temple is located on a hill, and the hill offers a magnificent view of the town from its top. Numerous activities like laughing clubs, yoga asana also takes place on this hill.

Build hundreds of years ago; the Bhavani Mandap is a building that is of rich historical importance and is assumed to be the glory for the city of Kolhapur. It was built during the reign of King Shivaji Maharaja II and was used to hold meetings and to meet important delegations of the king.

One of the most popular attractions of Kolhapur is the New Palace Museum which took seven years to be completed, from 1877 to 1884. The marvellous architecture of the palace mesmerizes the tourists and attracts people from all over the country.

The palace is uniquely carved from black polished stone and has a vast premise. Inside the premise, there is a garden, a fountain and a wrestling ground, originally designed to serve as an entertainment source for the king.

The ground floor of the New Palace contains a museum that is dedicated to the rulers of Kohlapur and is named as Shahaji Chhatrapati Museum which contains numerous artefacts from the historical periods.

Related read 10 Best places to visit near Kolhapur in winters

Located at a distance of 16 km from the city of Kolhapur, the Jyotiba Temple is of high religious importance for the local people and is a must-visit if you are visiting Kolhapur. Dedicated to Lord Jyotiba, who was believed to be the reincarnation of Lord Brahma, Vishnu, Mahesh, and Jamadagni, the temple is a beautiful piece of architecture.

The temple was built in the year 1730, and its height is about 3000 feet above sea level. On the two full moons every month, a big fair is held near to the temple which attracts numerous visitors. The temple is exempted from any entry fee and remains open throughout the day.

Considered to be one of the oldest lakes in the country, Rankala Lake was formed in the 19th century. It was built by the great King Chhatrapati Shivaji and is thus of great importance. The lake derives its name from the ancient Rankabhairav Temple, located in the middle of the lake.

The area surrounding the lake has been developed recently by the government, making it more accessible by the mass. A walking path has been built around the lake so that tourists can walk around. A garden has been constructed, which leads families to spend their weekends relaxing and grabbing bites from the road-side sellers of fast foods. You can also go boating on the lake or opt for horse-riding in the garden.

Constructed by the rulers of the Shilahara Dynasty, the Kopeshwar Temple was built in the 12th century. The temple is dedicated to Lord Shiva and houses an idol of Lord Vishnu too. The temple is the perfect example of the magnificent architecture and culture from ancient times.

Located on the banks of River Krishna, the Kopeshwar Temple has numerous carvings and sculptures of dancing gods and goddesses, the temple has four different sections and comprises of 108 stone pillars. The temple also has an elephant statue that holds the weight of the structure. The ceiling of the temple is semi-circular in shape. The walls have numerous carvings and engraved shlokas on them. You can also find local food shops and washrooms outside the temple.

Located at a distance of 76 km north-west of Kolhapur, Vishalgad was a fort built on a hill on the Sahyadri mountain range. Today, only the walls of the fort remain as the fort is completely in its ruins.

Surrounded by vast valleys and forests, Vishalgad is a popular place among nature lovers who come here to enjoy and submerge themselves in the magnificent view that the place offers.

If you love trekking, then you can take up the trail and hike to this place. Nearby, there is a Durgah of Baba Malik Rehan Sahab which is a holy site for the devotees.

Located at Kasaba Bawada main road, Kohlapur, the Dream World Water Park is a perfect destination for tourists of all ages, especially children.

There are numerous rides available in the water park, which will take you on a roller-coaster ride worth remembering for your lifetime. The joyful experience you will gather in this park is unmatched. It is definitely one of the best places to visit in Kolhapur.

With numerous attractions like the wave pool, dragon rides, horse rides, the Dream World Water Park is perfect for bringing out the child in you.

Located 21 km to the north-west of Kolhapur, the Panhala Fort is a huge fortress and also commonly known as Panhalgad. Built by the famous Raja Bhoja II in the 13th century, the fort stands at an elevation of 2,700 feet above sea level and attracts thousands of tourists to witness its grandeur.

With the perimeter of the fort being more than 15 km long, the fort has numerous tunnels that round underground. Resembling the Bijapur style of architecture, the Panhala Fort has multiple places of interest like the Amber Khana, Andar Bawadi, Dharma Kothi, Sajja Kothi, and many hidden exit routes.

The fort is the perfect example of a historically important piece of architecture with intelligent and strategic location, overseeing the Sahyadri Pass which was once the major trade route.

Built during 1931-1934, the palace was named after the famous princess of Kolhapur, Princess Shalini Raje. Intricately build from polished black stone and rich Italian marble, the palace was priced at about 8, 00,000 Indian rupees. The palace has doorways made from rich decorative wood and Belgium glass fitted on them.

The beautifully painted glass on the windows and watchtower are some of the points of attraction of this palace. In 1987, the palace was turned into a 3-star heritage hotel. The authentic and unique style of the castle has made it a popular site for shooting movies.

Hope you liked this article on the best places to visit in Kolhapur. Do share your views with me in the comments section below. If this article was helpful, do share this post with your friends on Facebook and Twitter. It would mean a lot to me.