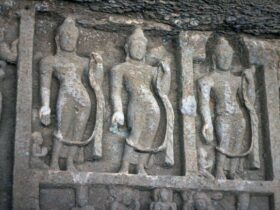 Lohagad Fort is one of the best attractions in your Lonavala trip situated at a distance of 11 kms from the Lonavala City lying on one side of the Sahyadri ranges.

The fort is one of the best examples of the strongest forts ever in Indian history that witnessed numerous wars and explosions and fell into the hands of several rulers, but in spite of that, it has been able to maintain its intact structure with slightly broken parts in some areas.

The fort is surrounded by stunning lush green greeneries and holds picturesque scenic beauty. Millions of tourists from Mumbai, Pune and various parts of the country and world, visit this Fort to explore its majestic structure and enjoy an amazing monsoon trekking. It is a highly popular tourist destination close to Lonavala.

Lohagad fort is one of the famous forts of Maharashtra, situated at a distance of 52km from Pune and stands at an altitude of 1,033 meters. The Fort has high historical importance and has been passed to the hands of various rules like Chalukyas, Rashtrakutas, Satavahanas, Bahamanis, Yadavas, Mughals, Nizams, and Marathas during their reigning period.

Lohgad is believed to be ruled by the Bahamanis initially which first fell into the hands of Malik Ahmad in 1489 when he was a ruler. Then in 1564, Burhan Nizam Shah II who was the seventh successor Ahmadnagar dynasty was captured here, and when they got defeated, Lohgarh went into the hands of Bijapur rulers along with the Fort.

It was in 1648 when Chattrapati Shivaji Maharaj defeated the Bijapur king in battle and gained control over the Fort. Then in 1665, due to unfortunate circumstances and rising glory of Dilawar Khan and Jai Singh, Shivaji had to surrender the Fort to Mughal ruler Aurangzeb forcefully.

You may also like Karla Caves, Lonavala – History, Architecture, Timings And Entry Fee

Later in 1770, the Marathas gained control over the Fort again, but soon in 1713 it was captured by Angria and in 1720 by Balaji Vishwanath. In the year of 1770, Javji Bomble who was the head of Bombe Clan was given a job in Peshwa’s Government service revolted creating a massive explosion destroying the Ahmadnagar dynasty and took over the Lohgarh Fort.

In the year of 1800, The Peshwas started controlling the Fort with the help of the efficient minister Nana Fadnavis who placed a person called Dhondopat to see the services of the fort but soon after his death Dhondopat demanded compensation amount for nana’s wife and his inherent.

Soon Dhondopat became a traitor too and attacked the Fort. Being punished for his behaviour, he was sent to Thana and in 1803 Peshwas gained control over the fort. Few months after that a battle broke out between the Peshwas and the British forces under Colonel Prother around 1818, and the Fort became the attacking point of the commanders.

After numerous fights and battles, finally, in 1862, the Fort was declared as the strongest one which could not be destroyed in spite of so many battles and continued to remain in its intact structure till date having slight damage in its walls and gates.

The architecture of Lohagad Fort

Lohgad Fort popularly known as the Iron Fort is located on the Sahyadri ranges acting as a divider between the Indrayani and Pavna river basins. The fort stands at a towering height of 3400 feet and sprawls across a large area. It has four significant entrances- Ganesh Darwaja, Narayan Darwaja, Hanuman Darwaja, and Maha Darwaja.

It is also believed that the fort witnessed the construction of many new structures built in the latter half of Peshwas rule like the big tank and the step well. The western side of the Fort consists of a structure similar to Scorpions tail which houses a cliff of 300 feet height at the beginning which progressing further leads to a gateway having an arched structure with a height of 150 feet that serves as the entrance of the local villages.

Crossing the local villages of the Lohavadi lies the main fort which is led by a rock-cut staircase and consisting of four gateways having arched structure and double bastions. The fort houses three small caves on the right-hand side whose entrances have been sealed by the masonry walls.

The caves are named as- Salt Store having a length, breadth and height of 19 feet, 22 feet, and 6 ½ feet height respectively. The wall on the eastern side consists of two stone benches and the space between the benches gives way to the second cave which is guarded by stone and mortar walls.

The third cave lies in close proximity to the first and seconds within few yards whose interior is half filled with water and entrance guarded by masonry walls. All four gates follow Mughal architecture and made of iron. The Ganesh gate is supported by elephant statues. The interior of the Ganesh gate houses a broken shrine of Ganapati while the Narayana gate houses shrine of Goddess Parvati postured in crossed legs.

The Hanuman gate consists of stone carved broken image of Lord Hanuman while the Main Gate has a wooden structure built in the Mughal style and the opposite of it houses the cenotaph dedicated to Aurangzeb. The entire Fort consists of numerous ruined but intact architectural patterns, and in-between caves enough to give you the thrills from ancient past.

The trekking route is quite easy here and suitable for all kinds of visitors. If you want to trek only in the fort area, the best option is to drive till the base village and have a direct entry to the stone steps of the fort. But if you are looking for a bit long trek exploring the local villages, areas, and then reaching the fort, you can start from Bhaja Village, walk up to Gomukh Khand and then you have two options.

The package includes trekking of both Visapur and Lohagad Fort covering numerous beautiful spots across the way, enjoy the chirping of birds, feel the monsoon fresh air, and have mesmerising views of the surrounding mountain ranges. The package includes breakfast, and lunch facilities and gives you a complete list of all the necessary items to carry for the trek.

The Fort is an absolute delight to enjoy in the monsoon season as it offers a picturesque scenic beauty standing tall against the cloudy, misty sky and completely wet from the monsoon rains.

The various small streams located inside the fort looks breathtaking during the monsoon season, and the fort also offers an amazing view of the Pavna Dam which cannot be missed at any cost. The overall trekking is very thrilling yet comfortable and gives you a wonderful experience of adventure and beauty.

You may also like 10 Most Popular Churches In Lonavala

Lohagad fort is one of the popular tourist attractions at Malavali near Lonavala. It can be visited at any time of the year but the best time to visit this fort is during the monsoon season between middle of June to September as we all know how beautiful Lonavala and its nearby areas look in monsoon.

The fort being situated at Malavali close to Lonavala holds breathtaking beauty under the cloudy sky having a dark wet look in the bright green surroundings and you can enjoy the amazing monsoon trek to the Lohagad fort during this time. The winters are also good to visit the fort during the months of December to February.

How to Reach Lohagad Fort

Lohagad Fort is situated in Malavli which does not have any particular airport or railway station but can be accessed by road, air, and railways in the following ways:-

By Air
If you are travelling by air, you have to reach Mumbai or Pune airport. From Mumbai, you can take a local train to Malavali railway station, and from Pune, you can hire a cab to Malavli to reach the fort.

There is no entry fee for any tourists whether Indian or foreigners to Lohagad Fort. You can enjoy exploring the fort freely and no extra fees you need to pay for the camera also.

Lohagad Fort is open all days of the week for visitors travelling from various parts of the world. The time to visit the fort is between 9.00 A.M. in the morning to 6.00 P.M. in the evening.

Lohagad Fort sprawls around a large area and takes around 3 to 4 hours to explore the interiors and surrounding areas of the fort. The fort offers amazing trekking facility for the visitors from the base village and Bhaja Village. Visitors love to trek all the way to reach the stone cut stair steps of the fort and finally exploring the four gateways and the interiors.

Places to Visit Around Lohagad Fort

While you are already done exploring the iconic Lohagad fort, you can also enjoy an array of beautiful place located close to the fort. They are:-

The fort is situated at a very nearby distance to Lohagad Fort, and a must visit on the tour. Standing tall at an altitude of 1,084 meters above sea level, the fort offers stunning architectural beauty admits the breathtaking surroundings spanning over a large area and holds numerous historical facts from the past. It was constructed from the period of 1713 to 1720 by the first Peshwa of the Maratha Empire.

It is a beautiful manmade lake formed by the waters from Pavana Dam on the banks of Pavana River. The Lake holds breathtaking scenic beauty offering captivating views of Lohagad Fort, Tunga Fort, and Tikona Fort. It is the best place to spend some quiet time admiring the creations of nature and also an ideal picnic spot with your family members.

Located at a distance of 9.6 ms from Lohagad fort, Bhaja caves are a sight to behold glorifying the ancient cave architecture. It is a group of 22 caves made from rocks standing at a height of 400 feet from the base village. The caves follow Buddhist architecture consisting of stupas, chaityagrihas, and viharas. The caves are full of artistic carvings and have amazing woodwork.