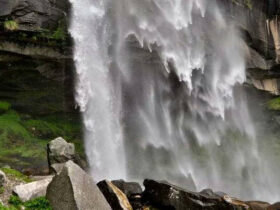 5 Most Beautiful Waterfalls in Manali

Jallianwala Bagh – A Complete Guide. Often while choosing travel destinations, we tend to give importance to naturally occurring beautiful places and ignore historic places. Jallianwala Bagh is one such marvellous historical place to visit with your family and kids and to boost them with knowledge about our history.

It is a garden complex located in Amritsar on a seven-acre land. Situated near to the premises of Golden Temple, the Jallianwala Bagh is one of the most important attractions. Holding huge importance in the history of India, it houses memorials and shrines dedicated to those who lost their lives here.

Originally the piece of land belonged to a man from the village of Jalla and hence the name Jallianwala Bagh. The land contains a well and thus was flourishing in flowers and vegetation. Soon the place was compact and had numerous buildings constructed around it, leaving it with only one exit and entrance.

On 13th April 1919, the day of Baisakhi, official bellmen read out the new official rules with the beating of drums in many cities of Punjab. The rules clearly banned people from holding any procession, protests or leaving the city.

Due to the scorching heat and lack of details, the notice was not properly spread. Meanwhile, about a group of 15,000 people from Hindu, Muslim, Sikh and Christian communities including children, women had gathered in Jallianwala Bagh to protest against the Rowlatt Act and deportation of Satyapal and Saifuddin Kitchlew.

You may also like 14 Beautiful Hill Stations Near Amritsar

Soon General R.H Dyer arrived at the site with more than ninety troops and ordered them to fire openly on the crowd. After which more than 1,500 people were killed, including children and women.

Numerous people jumped into the well and died. As the entrance was very narrow, the troops covered it, and people ran for their lives towards the wall and were shot.

The well has a structure build upon it with the number 120 inscribed on it which depicts the number of dead bodies recovered from the well. Other than this, there is an Amarjyoti which is an ever-burning flame and a statue of Udam Singh. Apart from these, there are few portico pillars representing the soldiers.

As the memorial of Jallianwala Bagh is a witness standing to our blood-stained history, it is of huge national importance. Numerous visitors from all over the country and historians visit the place to pay respect to the martyrs and experience the gruesome act of the British Army.

Thus the entry fee is kept at a zero price so that everyone can enter the garden complex and explore the history of India’s freedom struggle.

If you are planning to visit Jallianwala Bagh, the opening hours are from 6.30 in the morning to 7.30 in the evening. You can visit anytime during these hours. It is advised that you visit during daylight as the scenario becomes clearer then.

How to Reach Jallianwala Bagh

The nearest airport to Jallianwala Bagh in Amritsar is Sri Guru Ram Dass Jee airport. Located at a distance of only 14 kilometres from the airport, it can be easily reached by rickshaws, autos or private cabs or taxis.

The Amritsar Junction Railway Station is the nearest station to Jallianwala Bagh. It is well connected to nearby cities as well as major cities. After reaching the station, you can choose from any local mode of transportation to visit this place.

There are numerous options for buses available too. The nearest major bus stand to Jallianwala Bagh is Jammu, which is connected to most major cities.

Apart from this, there is a small local bus stand called Jallianwala Bagh Bus Stand which has a few buses travelling to other bus stops as well as Jammu.

As Jallianwala Bagh is located in Amritsar, Punjab, the place receives extreme temperatures in both summers and winters. During the summer months, the scorching heat makes touring around the complex difficult, and during winter, the chilly winds make it nearly impossible.

Thus the best time advisable to visit the memorial is during the months of October to November, pre-winter months when the temperature remains very soothing and comfortable. You can also visit Jallianwala Bagh during February and March, before Amritsar experiences summer.

One of the five Takhts or houses of power in Sikhism, the Akal Takht is one of the major attractions near Jallianwala Bagh in Amritsar. It was primarily built as a house of justice to temporal issues for the Sikh community and today serves as an important tourist spot.

Previously known as Akal Bunga, the platform of the structure was build in 1506 and later on re-build numerous times. Today the complex is five-storied and is made up of marble and has a tomb of gold.

Commonly known as Harmandir Sahib, the Golden Temple is the most important and sacred place for the Sikhs. The gurudwara was built in 1577 by Guru Ram Das and is made on a man-made lake. Nominated as a UNESCO World Heritage Site, the Golden Temple is one of the iconic landmarks of the country.

With a mixture of Indo-Islamic Mughal and Hindu Rajput architecture, the Golden Temple is two-storied and has a dome made up of gold. Numerous tourists visit the sanctum to experience its vivid grandeur as well as to pray to the shrine.

Located in the centre of Amritsar, Khalsa College was established in 1892 and spans an area of about 300 acres. It was established during the British Rule to provide Sikhs and Punjabis higher education and for their empowerment.

What makes the college a notable site to visit is the fact that it has provided the country with numerous freedom fighters who gave their lives for India. The college building is built in Indi Saracenic style and is a blend of Indian and Mughal style.

Hope you liked this article on the Jallianwala Bagh. Do share your views with me in the comments section below. If this article was helpful, do share this post with your friends on Facebook and Twitter. It would mean a lot to me.