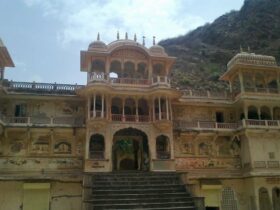 13 Most Popular Temples in Jaipur

Kumbhalgarh Fort – A Complete Guide. Mankind has tried to keep its mark in history for centuries. Since the evolution of Man, from cave painting to building forts and palaces, he has not only been successful in creating history but also in mesmerizing viewers with its grandeur.

Visiting such places with your family or by yourself provides immense knowledge about history and also boosts your soul with positive energy. Such palaces, forts, and structures are not only heritage sites for our country but also helps us connect with our roots. One such marvellous piece of ancient architecture is the Kumbhalgarh Fort.

One of the World Heritage Sites included in the Hill Forts of Rajasthan, the Kumbhalgarh Fort is a Mewar fort built in the 15th century. It is located in the Rajasmand district on the Aravalli Hills in Rajasthan.

It was built by Rana Kumbha and is one of the largest forts in the world. Rana Kumbha built the fort with the help of the famous architect Madan.

The fort served as a refuge for the Mewar rulers during wars. The Kumbhalgarh Fort was the birthplace of the legendary ruler, Maharana Pratap.

The strategic location of the fort separated Mewar from Marwar and with its architectural design, was impregnable. After numerous attacks by the Mughals, the fort was finally surrendered to Shahbaz Khan, a general of Akbar but soon after was regained successfully by Maharana Pratap.

In 1818 the British took over the fort and returned it to Udaipur. The fort was inhabited till the 19th century, and afterwards, it was open for public visits.

The Architecture of Kumbhalgarh Fort

The Kumbhalgarh Fort is located at an elevation of 3,600 feet above sea level on the Aravalli ranges. It has walls running as long as 36 kilometres and has a thickness of 15 feet.

This made the fort impregnable during foreign attacks. The fort has seven gateways and numerous structures built within its walls.

There are about 360 temples within the fort walls. Three hundred of the temples are Jain, and 60 are dedicated to the Hindu Gods. If you reach the terrace of the Kumbhalgarh Fort, you will be able to see far into the Aravalli Ranges and sand dunes of the desert.

According to some tales, Rana Kumbha used to lit huge lamps that consumed tons of ghee on the fort’s terrace every night to help the farmers work during the night.

Other structures inside the fort include Lakhola Tank, a tank that has a depth of more than 40 feet. Aaret Pol, Halla Pol, Ram Pol, Hanuman Pol are the notable gates of the port. Hanuman Pol is the largest and most marvellous structure in the fort from where you can see most of the buildings.

The magnificent Kumbhalgarh Fort remains open for all tourists every day throughout the week. The timing to visit the fort is from 8.00 AM to 6.00 PM. Ideally, it takes about an hour or two to explore the fort completely.

The entry fee to Kumbhalgarh Fort is Rs 15 for all Indian travellers on weekdays. If you are planning to visit the fort during the weekend, the ticket fare rises to Rs 100 per person as they host the incredibly beautiful light show. If you are a foreigner, the entry fee is Rs 200.

How to Reach Kumbhalgarh Fort

Kumbhalgarh Fort is one of the important UNESCO World Heritage Sites and is well connected with other parts of the state of Rajasthan. You can reach it either by train, flight or bus, whichever is more convenient for you.

The nearest airport to reach the Kumbhalgarh Fort is the Dabok Airport located in Udaipur which is about 66 km away. You can also board a flight to Jodhpur Airport.

There are numerous buses that leave to and from Kumbhalgarh from Rajasthan and nearby cities. You can choose a deluxe or state bus accordingly.

Places to Eat Near Kumbhalgarh Fort

There are multiple luxury and budget-friendly hotels and restaurants near the Kumbhalgarh Fort as many tourists visit the place and it is commercially active.

You may also like 19 Popular Places To Visit in Udaipur

Nearby Attractions to Kumbhalgarh Fort

Spanning an area of more than 610 square kilometres, the sanctuary covers four hill and mountain ranges of the Aravalli. Twenty-Two villages are present inside the sanctuary and home to numerous tribes and locals.

Literally translating to the “ House of female friends”, the Saheliyon Ki Bari is actually a garden with beautifully sculpted pieces of architecture. It was built by Rana Sangram Singh and is located in Udaipur.

The garden has numerous fountains, kiosks, a beautifully maintained lotus pool and many elephants sculpted from marble.

According to local tales, King Sangram Singh’s wife, the queen was accompanied by her 48 friends during her wedding. The King built the garden and presented the queen so that she can stroll leisurely with them.

Located at a distance of 40 kilometres from Udaipur, Haldighati is a mountain pass in between Khanmore and Bagicha Village. The name derives from the surrounding yellow colour of the soil.

The mountain pass is very important in Indian history as it is here that The Battle of Haldighati took place between the Kingdom of Mewar and the Mughals. It is here that Rana Pratap’s favourite horse, Chetak gave his life and there is a small cenotaph build by Maharana Pratap for his memory.

Also known as Chaturmukha Dharana Vihara, the Ranakpur Jain Temple is located in Ranakpur, Pali district of Rajasthan. The Jian temple is dedicated to Tirthankara Rishabhanatha. The temple was built in the 15th century by Darna Shah, who was a rich Jain businessman.

The temple is considered to be one of the largest Jain temples in the country and includes many small temple complexes like that of Chamukha, Surya, Amba, etc. The temple is famous all over the country for its intrinsic carvings and fine works.