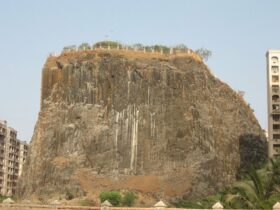 Amritsar is one of the most important tourist attractions in India in the state of Punjab due to its stunning Golden Temple, Akal Takht and range of Gurudwaras and other sightseeing attractions. Read on to know about the best places to visit near Amritsar within 100 Km.

Amritsar is also loved by tourists due to its amazing shopping destination having beautiful traditional ethnic wears, craft items and most importantly the lip-smacking food of Punjab which you won’t find anywhere in the world with the same quality.

Best Places To Visit Near Amritsar within 100 Km

Amritsar apart from its city attractions is a hub of many other wonderful heritage destinations located around the city. The following are some of the finest destinations to include in your Amritsar trip within a distance of 100 km from the city.

Here is a list of the most popular places to visit near Amritsar within 100 Km.

It is a village destination come union council in Punjab which is famous as the border of India and Pakistan. The destination lies in the Grand Truck Road separating Lahore and Amritsar and is widely known for the grand Wagah border ceremony since 1959.

The border is situated at a distance of 24km from Lahore and 32km from Amritsar. The Wagah border ceremony is witnessed by not just the Indian citizens but, also plenty of foreign tourists even come here especially to see the beautiful parade and flag celebration.

The flag ceremony here is hosted by the Indian Border Security Force (BSF) and the Pakistan Rangers. The celebration is hosted every day before sunset time. It is hosts entertainment events with Bollywood songs and parades with National Anthem playing in the background accompanied by loud shouts, high kicks and heavy foot stomping of the soldiers.

It continues for a duration of 45 minutes and ends with lowering down of the two country flags simultaneously after the sun sets.

It is the eight largest cities of Punjab situated at a distance of 41kms from Amritsar. It is basically a small town and a famous tourist attraction in Punjab due to its heritage structures. The destination houses plenty of beautiful palaces, architectural Gurudwaras, Hindu Temples as well as churches.

Batala is a historical city which was found in the 15th century by Rajput king Raja Ram Rao. It also got ruled by the Mughal and British. Some of the famous heritage destinations to visit in Batala are- Jal Mahal, Shamsher Khan’s tomb, Kali Dwara Mandir, Gurudwara kandh Sahib, Achleshwar Dam, Achal Sahib Gurudwara and so on.

Apart from the sightseeing attractions, Batala is also famous for its two major shopping destinations- Zail Ghar market, and Maharaja Market both of which are famous for handicrafts and Indian traditional wears.

You can easily access Batala from anywhere by reaching Guru Ram Das International Airport at Amritsar by air and taking a cab to Batala or catch a train from Amritsar and reach the Batala railway station.

You may also like, 6 most romantic things to do in Amritsar for couples

It is a famous city of Punjab situated on the banks of Beas and Raavi River at a distance of 87.7 km from Amritsar and 10km from Wagah border. It is a 17th-century destination that was found by Guriya Ji and hence the destination got its name as Gurdaspur.

The destination has got a major historical significance due to the number of famous events that took place in and around Gurdaspur. It houses the Antediluvian caves in ShahpurKandi by the banks of Raavi River that are known to be from Hindu epic Mahabharata period. It is also the destination where Alexander fought many battles; Prince Akbar got crowned as the Mughal emperor.

It represents half of Punjab’s history and culture along with delicious Punjabi food. It is famous among visitors for its annual celebration of Guru Nanak Dev jis marriage, Baishaki, Lohri, and Shivratri. It is definitely one of the best places to visit near Amritsar within 100 Km.

It is a famous city of Punjab located at a distance of 82 km Amritsar with a rich historical background. The city was known by the name of Prasthala in the era of Mahabharata which later got renamed to Jalandhar under the British Raj.

The city has derived its name due to its strategic location between Beas and Sutlej River as Jalandhar in Hindi means- ‘underwater area’. If you consider the fact of Purana, the city is believed to derive its name from the demon king Jalandhara.

The surrounding regions of the city are known as Jalandhar Doab which is also referred to as the eastern territory of Alexander’s kingdom. Plenty of tourists from different corners of the world come to visit this city due to its collection of multiple heritage sites, religious destinations that speaks of the past history.

Related read, 7 best places to visit in Amritsar in 1 day

It is a renowned city of Punjabi located in the Hoshiarpur district in the northeastern part of Punjab. The city plays a pivotal role in the epic of Mahabharata as it houses plenty of sites associated with the Mahabharata heroes- Pandavas.

According to mythology, Hoshiarpur’s location Dasuya is one of those destinations where Pandavas spent 13 years during their exile period. The destination has a touch of history and ancient traditions everywhere starting from its ancient temples, winding lanes to the legendary archeological remains.

It is literally a paradise destination located at Khyber Pakhtunkhwa province of Pakistan in the Mansehra district. The 155 km valley is an eye-arresting summer destination having gorgeous green pine and alpine landscapes guarded by mountains on all sides that starts from an altitude of 2,134 feet from sea level to a towering height of 13,690 feet called Babusar Pass which is the highest point of the location.

The unspoiled paradise apart from the breathtaking mountain and valleys is filled with crystal clear lakes and glaciers giving the entire destination a heavenly look. It is a famous international holiday spot for foreign tourists as well as Pakistani residents.

One of its bewitching attractions is the Lake Saif Ul Muluk named after Prince Saf-ul-Muluk. It is nothing less than a fairyland having snow clad mountains on all sides of the crystal clear lake with Malika Parbat at their summit which is also the highest peak of Khagan valley.

This is another popular destination is Punjab located to the northern part of Pakistan’s capital Lahore. It is also the 7th most populated metropolitan area of Pakistan and its third large industrial center. It is connected to Peshawar and Lahore by the Grand Trunk Road.

The destination is also famous as the City of wrestlers as it is had produced many famous wrestlers so far and gives wrestling major importance. The city was found in 1867 by the Gurjars who were a pastoral community and it is also the birthplace of Ranjit Singh – the Sixth Sikh guru ruler. It is currently an extremely urbanized zone housing plenty of city attractions, hospitals, learning institutions, universities, shopping destinations, and eateries.

Hope you liked this article on best places to visit near Amritsar within 100 Km. Do share your views with me in the comments section below. If this article was helpful, do share this post with your friends on Facebook and Twitter. It would mean a lot to me.