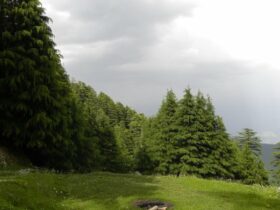 Visapur Fort is a major historical heritage in the state of Maharashtra that consists of two parts- Visapur fort and Lohagad Fort in the same plateau. Both were the properties of the Peshwas which later got bombarded and captured by British forces. Lohagad fort remained intact while Visapur For has been ruined majorly.

However, that does not prevent it from attracting the visitors as the numerous caves, streams blooming into waterfalls located inside the Fort having picturesque scenic beauty in the backdrop and covered in the blanket of fresh greeneries the Fort offers captivating beauty during the monsoon time and attracts numerous visitors around the world.

Visapur Fort is a historical heritage of Maharashtra located in Visapur village of Pune district. It lies close to Lonavala in the same plateau of Lohagad Fort. The fort was constructed by the first Peshwa emperor Balaji Vishwanath from the period of 1713 to 1720. The Fort is also known as the twinning partner of Lohagad Fort, and its fortifications offer protection to the Lohagad fort.

The Fort belonged to the period of Satavahanas and was constructed with an aim to keep an eye on the movements in Konkan and Bor Ghat. The Peshwas gained control on the Lohagad Fort in 1803 and made it as the biggest treasure of the Maratha Kingdom.

The growing popularity of Lohagad fort and the treasures it holds lured the British and in 1818, they decided to take control of both the Visapur and Lohagad fort and started planning for attack as per that. A giant group of 380 European Soldiers, 800 native army men, two British battalions and a collection of artilleries from Chakan was gathered together to declare war against the Peshwas.

You may also like Rajmachi Fort Lonavala Complete Guide

They started attacking from Konkan in the northern part to the Deccan gateways located in the southern part to cover the fortifications of both the fort. They took the facility of Visapur’s location and started blewing both Visapur and Lohagad fort areas with canons so that the Maratha people escape from the region and leaving their forts in the British hands.

It was on 4th March, when the British finally gained control over Visapur fort. Thus the two forts came under the administration of Colonel Prother who was a representative from the British forces, ceasing the authority from the Peshwas. The Visapur Fort was not as strong as Lohagad fort. In spite of so many explosions, Lohagad Fort is still intact, while a majority of the Visapur Fort today is in ruins except few parts.

The architecture of Visapur Fort

Visapur Fort is a ruined architectural beauty standing at an altitude of 1084 meters. The Fort comprises of many small streams, caves, beautiful intricate designs, and most importantly the Peshwa Palace which has been ruined completely. The fort is giant structure entirely built of granite stone, and its protecting walls are quite strong that acts as a shield to the Lohagad Fort.

The walls of the fort and numerous bastions on them are still intact. The entrance of the fort is highly spacious consisting of a series of stone carved steps. There are two open roof buildings in the Fort area which are an important structure as it used to be the secretariat building during ancient times.

The Fort is an abode of Lord Hanuman as more you progress towards the interiors and move higher up the hills, numerous statues of Lord Hanuman and stone carved figure is visible which shows that he was largely worshipped by the Peshwas. The upper hilltop of the fort is referred to as the Hanuman Temple of the Fort especially.

Other than this, there is also a well which was believed to be constructed by the Pandavas. The caves in the Fort are amazing which is said to be the meditation place for the Buddhist monks once and also served as the residential location of the tribal people during the ancient times.

Another significant structure of the Fort is the 10 feet British Canon with an enormous capacity to create a major blast still now. There are also few guns inside the fort from the period of Queen Elizabeth that are worth checking for. The numerous streams located in the Fort areas give stunning views I the monsoon season when they are in full bloom.

Leaving these few parts, the majority of the fort has ruined structure but still manages to gather numerous visitors enjoying its historical beauty in the panoramic green surroundings.

Trekking to Visapur fort is one of the best experiences to cherish for. The Trekking trails are amazing, and the unique part is you get to trek through waterfall trails here which in other areas you usually don’t find. There are three routes for Visapur Trekking- Bhaje Village, Patan Village and Gaimukh Khind.

Start from the base of the Bhaje Village with a straight 4 km walk, and after that, you get a forking of the route, one to the left and other to the right. Take the left one as the right one leads to Lohagad fort. Taking the left turn, follow the markings till you reach a landmark of stone with an orange colored horse painted on it. From there take a left, you will be led to the entrance of a waterfall route which you need to climb for 20 to 30 minutes to reach the plateau.

In this route keeping the Patan village to the left side, you need to take the guide from local people and follow the route till you reach the waterfall. Climb through the steps within the waterfall for 20 minutes and take a right for the Visapur route. Following the road signs keep climbing for another 40 minutes till you reach the broken staircase which marks the entrance of the Fort.

Take the route of Malavali to Lohagad, and on reaching Viraj Farms, turn left and continue walking till you get the forking of roads in left and right. Take the left turn and keep moving till Visapur kade board is displayed. Take the route and cross jungles and waterfalls on the way to reach the fort.

Visapur Fort doesn’t have any particular season to visit for. It can be visited anytime as the climate is always pleasant but if you are looking forward to having some unique experiences, the monsoon time is ideal as the Fort looks beautiful during this season and the interiors of the Fort have waterfalls cascading down the stairs formed by the blooming streams.

The trekking trails are also covered with gushing water, and the best part is you can trek to them to reach the Fort. The winters are also great for some dry treks and feeling the chilled climate in the hilly surroundings.

How to Reach Visapur Fort

It is easy to reach Visapur by air, rail, and road as it is located close to Lonavala.

By Rail
You can reach Mumbai and Pune rail stations from all major Indian cities and from there continue your journey via Lonavala to Visapur. Else if your location has direct rail access to Lonavala station, opt for it and reach Visapur by hiring a cab from Lonavala.

By Road
Visapur is well connected to Mumbai-Pune expressway through numerous winding roads. So you can take your private cars straight to Visapur Fort, or can take buses from Mumbai to Visapur.

There is no ticket required for any visitors to enter the Visapur Fort. The architectural beauty is free to travel for every visitor irrespective of their origin. You can even take the camera with you to capture views of the antique fort and mystic surroundings. No extra charge is required for cameras.

The fort does not have any specific opening and close timing. It is kept as it is for 24 hours all days of the week. However, for the visitors interested in trekking and exploring the fort, it is better to visit it during the daytime between 5 A.M. to 11 A.M.

Visapur fort is more massive compared to Lohagad Fort and hence trekking through the trails and exploring the plateaus, caves, the interiors of the Fort takes a minimum of 4 hours duration.

Places to Visit Around Visapur Fort

Visapur Fort has numerous beautiful places located nearby to explore. Some of them are;-

Visapur Fort and Lohagad Fort both come under the same fortifications lying on the same plateau. So It is a must-visit site while you are traveling to Visapur Fort. Lohagad Fort is of the strongest forts of the ancient historical period situated at an altitude of 3,390 feet above sea level.

The fort houses four significant gates with shrines of Lord Hanuman, Lord Ganesha, Goddess Parvati, and various caves and streams flowing in its areas. Visitors love trekking to the Lohagad fort which has much comfortable and smooth trekking trails, unlike the Visapur Fort.

It is a famous tourist attraction located at a distance of 7.4kms from Visapur Fort. The temple is dedicated to the devotees of Koli community and Chandraseniya Kayastha Prabhu community. It is a must-visit site during the trip to Karla caves being located in close proximity to its main Chaitya.

The temple is the abode of goddess Ekvira who is believed to be the mother of Parashurama and reincarnation of goddess Renuka. It holds a great religious value.

Situated at a distance of 9.8 km, Tikona Fort is another historical retreat having a triangular shape like structure. The fort is less famous compared to Lohagad and Visapur Fort but offers a beautiful scenic beauty acting like a watching tower and gives you fantastic trekking experience covering various sites on the way like Satvahan Caves, Mahadev Mandir, Seven Water Tanks, and Shakti Sai Baba Mandir.
Other popular places are Karla caves, Bhaja caves, Lonavala Lake, Pawna Lake, Lion’s Point and many more.