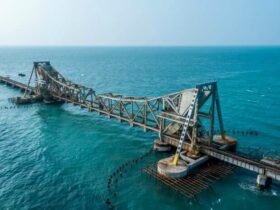 Travelling acts as an escape from all the boredom and monotonousness that life goes through. India being the incredible land it is often referred to, houses numerous jewels of nature including mountains, valleys, forests, deserts, and oceans.

Rajasthan being the only desert state of the country, attracts numerous tourists from all over the country as well as from other countries.

With a rich, colourful culture, Rajasthan is home to numerous indigenous tribes and has palaces, artificial lakes, and forts that add to its beauty. Lake Pichola is one such magnificent jewel sparkling in the crown of the “Land of the Maharajas”.

Built in 1362 AD, Lake Pichola is an artificial Lake located in Udaipur. It was named after the nearest village Pichola and is easily accessible from the city of Udaipur by bus or private cabs.

The Lake was initially built to meet the drinking water need of the city. The Lake has four islands that serve different purposes. Jag Niwas and Jag Mandir houses the Lake Palace and Jag Mandir respectively.

Mohan Mandir was famous and the royal family would watch the annual festivals from this island. Arsi Vilas, the fourth island was primarily built for the Maharanas to watch sunset and sunrise, and today it is a bird sanctuary, home to numerous species of birds.

Banjara was a tribesman and a merchant of grains who build the Lake in 1362 AD near the village. Impressed with the magnificent beauty of the Lake, Maharana Uday Singh built the city of Udaipur on its banks.

Maharana also improvised the Lake by building a dam on one of its shores. Today, the Lake is a spectacular view to witness with the backdrop of green mountains.

Boating is the most interesting and mesmerizing activity that you can do in Lake Pichola. With the vast water capacity of the Lake and the open blue sky above, the experience of boating is spectacular in Lake Pichola.

The boats available in the Lake are covered with a canopy and have a capacity of 6 to 8 people.

The experience of boating during sunset is actually spectacular when the water reflects the colourful lights of the setting sun and gets covered with an orangish hue.

Tourists flock the Lake during this time, and as a result, the ticket price has also been increased during sunset. The boat ride starts from Rameshwar Ghat and first you will be taken to Lake Palace and then to Jag Mandir.

There is no entry fee to Lake Pichola. Travellers can enter the Lake without paying any fee. However, if you want to boat, the charges are Rs 400 for adults and Rs 200 for children.

If you are planning to boat during the sunset, the ticket prices rise to Rs 700 for adults and Rs 400 for children.

Lake Pichola is open for tourists on all days of the week, including weekends. You can visit the Lake anytime between 9.00 AM to 6.00 PM. If you are planning to go boating, it starts at 10.00 AM and lasts till 5.00 PM.

How to Reach Lake Pichola

Located at the perimeter of Udaipur, the city of lakes, it is well connected with the rest of the country. You can reach Lake Pichola by train, flight or red.

The nearest airport to Lake Pichola is the Maharana Pratap Airport which is located at a distance of 20 kilometres from the main city. You can board a taxi from the airport.

The nearest station to Udaipur is the Udaipur Railway Station. The station is well connected to all major stations of the country including Ahmedabad, Sealdah, Delhi, etc.

There are numerous deluxe and semi-deluxe buses that run between the neighbouring countries of Udaipur. You can also board a bus from the Rajasthan State Road Transport Corporation to reach the nearby cities.

July to September is the monsoon months in Rajasthan and is considered to be the best time to visit Lake Pichola. You can also visit the Lake in winter, from the months of October to late February.

However, summer is advised to be avoided as the scorching heat makes exploring the Lake nearly uncomfortable. The temperature rises as high as 40 degrees.

Make sure you visit the Lake during sunset as the beauty of the Lake magnifies during this time.

Places to Eat Near Lake Pichola

Known worldwide for its delicious cuisines, Rajasthan is famous for its authentic delicacies and has numerous restaurants, cafes and eating places that are flooded by tourists.

Lake Pichola being one of the prime spots of Udaipur, holds on to this and thus has numerous eateries.

The most popular restaurants and cafes near Lake Pichola are Restaurant Ambrai, Shamiana Rooftop Restaurant that offers a magnificent view of the glimmering Lake, Upre, Rainbow, Charcoal, etc. you can also opt for pure vegetarian food in Udaipur as it has expertise in veg meals and thalis.

Build-in the year 1553 AD, the City Palace in Udaipur is one of the marvellous pieces of architecture. It was built by Maharana Udai Singh II and was completed by 22 generations of his for a period of 400 years. The City Palace is not a single palace but a complex of 11 palaces.

Built with marbles and granite, the City Palace excels in latticework, mirror work, stone carvings and sculptures that have attracted numerous tourists each time.

With walls running as long as 35 kilometres and thickness of 15 feet, the fort was impregnable and did not give away to numerous attacks. Famous as the birthplace of Maharana Pratap, the fort is located at a distance of 84 kilometres from Lake Pichola.

Located inside the premises of Lake Pichola, the Jag Mandir is an island on the Lake. Also known as “Lake Garden Palace”, it was built in the year 1551, and its construction was done by three rulers namely, Maharana Amar Singh, Maharana Karan Singh and Maharana Jagat Singh II.

The palace was used by the royal family for holding ceremonies and parties and was a summer retreat in between the Lake. The magnificent palace is three-storied and includes statues carved out of stones of elephants, Gul Mahal, Garden Courtyard, Bara Patharon Ka Mahal and many more.

Build-in between 1743 and 1746, the Lake Palace is another palace located on Jag Niwas, a prime island on the beautiful Lake Pichola. It was built by the Maharanas of Mewar and is now turned into a heritage hotel by their successors.

Owing to its beautiful location, it has now become a luxury palace, where many guests from all over the world come to visit. With the hills in the background and the clear freshwater lying underneath, Lake Palace is truly a heritage of the country.