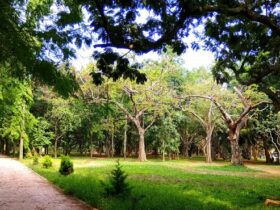 A complete guide to the most popular temples in Wayanad. To overcome the boredom and monotonousness of work pressure and daily chores, travelling works like a boon. Nothing beats the beauty of nature that Kerala, God’s own country, provides.

Be it valleys, forests, mountains or waterfalls, Kerala flourishes more than any other place. Read on to know about the most visited temples in Wayanad.

In the urge to explore the natural beauty surrounding us, we often forget to appreciate the excellent man-made structures around us.

Kerala, along with nature, is home to numerous mystic temples and religious places. Wayanad is such a place in Kerala that has excelled in beautiful temples and allure visitors from all over the world.

Here is a list of the most popular temples in Wayanad.

Seetha Devi Temple is a unique temple that is located at Pulpally in Wayanad. The temple is dedicated to Lava and Kusha, the children of Lord Rama and Sita. The temple premises houses a pond that is the largest in Pulpally.

According to legends and folklore, the name of the place Pulpally means a bed of grass, which is supposed to be the place where Lava used to play as a child.

It is believed that after Sita was deserted by Rama, she took shelter under the sage Valmiki and gave birth to her sons Lava and Kusha, at this place.

Also known as the Puliyarmala Jain Temple, it is located at a distance of 6 km from Kalpetta. The temple is dedicated to Anantnath Swami, one of the Tirthankaras of the Jain faith.

Considered to be one of the important Jain temples in South India, the temple offers calmness and serenity to the visitors.

If you are looking to spend some alone and quality time meditating or praying then this temple is perfect for you. You can spend hours sitting in the temple and calm your mind with positivity.

Located near the border of Karnataka state, Thirunelli Temple is located at an elevation of 900 meters. It is ancient in origin and is dedicated to Lord Maha Vishnu.

Situated at a valley covered by forests and rough mountains, the temple is a unique piece of architecture that attracts visitors from all over the country.

In the dense forest surrounding the temple, ruins of two ancient villages are found. There is no proof about the origin or construction of the temple. However, the beauty of the temple lies in the carved woodwork and sculptures made from stone.

Located high in the hills of Valliyoorkavu, the Valliyoorkavu Temple is an ancient temple dedicated to Goddess Durga. The temple is very famous among the local people and holds a special place among them.

The local people and the tribals living nearby believe the idol of the Goddess to be self-manifested and thus worship her devotedly. In the month of March, the people organize a special festival that lasts for two weeks.

The tribal people dances and sings to please the Goddess and the experience is spectacular. The scenic beauty of the nearby hills covered by forests and the gushing Kaveni River is also a spectacular view to witness.

Also known as the Maha Ganapathi Temple, the Ganapathi Vattam Temple is located in the Suthan Bathery Town. Located just near the bus stop, it is well connected with the nearby cities. The temple is dedicated to Lord Ganesha and has a rich history.

The Ganapathi Vattam Temple was built about eight centuries ago and was under the rule of the Kottayam Rulers. After few years Tipu Sultan is said to have destroyed the temple but soon after renovated it.

The temple holds a festival during the month of January and February for eight days which is a famous festival among the locals.

Located in the Ernakulam district of Kerala, the Pazhur Vishnu Temple is a very famous and ancient structure dedicated to the Lord Vishnu. Every day many locals visit this temple to offer their prayers to their Ishtadevata.

Considered to be one of the famous and ancient temples of the locality, the Pazhur Vishnu Temple is a marvellous piece of architecture build with granite and timber.

Located in the Kalpetta Bathery route of Kerala, the Thrikkaipetta Shiva Temple as the name suggests is dedicated to Lord Shiva. Thrippaipetta is derived from Malayalam and means “bands in three hands”.

Other than the mystic idol of Lord Shiva, the temple also houses the idols of Lord Ganesha, Lord Ayappa and Naga. Located amidst the lush green mountains, on a sloppy valley, the temple appears as a cottage.

The aura surrounding the temple is calm and serene. The overall ambience creates a serenity that helps the devotees connect with their inner selves.

Considered to be one of the ancient temples in Kerala, the Thrissilery Shiva Temple is located in Thirunelli. The deity present in the temple is Lord Shiva, who is in his swayambhu form.

Along with Lord Shiva, Jala Durga also resides in the temple. The temple was built by ancient kings in the medieval ages.

The temple is built on a tank on the Papanashini River and said to have held water for centuries. The tank has never dried up and according to some tales is connected to Parshuram.

Every year many devotees visit the temple, especially during Mahashivratri, in the months of February and March, to gain blessings.

Located in Pulpally, Kappiset region, the temple is dedicated to Lord Shiva and has huge importance in the lives of the local people. It is believed that the temple previously was not present and all there was a huge banyan tree whom the tribal people worshipped as their deity.

Soon after, many people, along with the locals, visited the place and as they found serenity and tranquillity, they thought of building a temple there.

One of the renowned devotees, Govindan, had a dream in which Lord Shiva appeared and advised him to build the temple. This temple still holds an important place in the lives of the tribes living in the villages nearby.

Hope you liked this article on the most famous temples in Wayanad. Do share your views with me in the comments section below. If this article was helpful, do share this post with your friends on Facebook and Twitter. It would mean a lot to me.