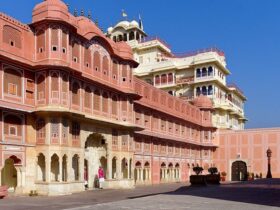 Weekend Getaways from Delhi – 18 Best Places To Visit Near Delhi

The wanderlust of each soul drives it in search of peace and tranquillity. No matter which time or which place, our minds need the change from the monotonous life that it had been living. Although travelling is essential for one’s mind and body, visiting places in the months of April and May makes it very difficult. Read on to know about the best places to visit near Delhi in April.

Popular Places To Visit Near Delhi in April

The scorching heat of the summer months makes travelling nearly impossible. Though the kids stay at home for their summer vacation, sometimes you wish for a change that might be refreshing for you.

Located in the Kullu Valley of Himachal Pradesh, Manali is a famous resort town known for its adventurous hikes and scenic beauty.

Located at a distance of about 540 kilometres from Delhi, the place attracts numerous tourists every year. Named after the famous Hindu character Manu, the hill station reaches minimal temperature as low as -7 degrees in winter.

Known for its scenic beauties and snow-capped mountains, Manali has picturesque views of meadows and valleys that bloom with flowers.

With gushing blue waterfalls and lush green valleys that offer sites for hiking, cliff climbing, trekking and much more, Manali is popular among the adventurous tourists.

Established among the dense forests on the Himalayas, Shimla is a famous retreat for the travellers and ideal to visit in April.

Known to be the summer capital of British India, Shimla is best known for the amalgamation of scenic beauty along with ancient colonial architecture.

The Viceregal Lodge, Christ Church, Jakhoo Temple, Mall Road are some of the most important buildings located on the hilly slopes of Shimla. Other than these, there are numerous churches and temples that add to the beauty of this place.

Covered mostly by dense coniferous forests of deciduous and cedar trees, Dharamshala is one of the most popular tourist spots in Himachal Pradesh with the backdrop of the Dhauladhar mountains, Dharamshala is an epitome of scenic beauty.

Dharamshala is also famous among the Tibetian devotees as Dalai Lama himself resides here. Thus, numerous devotees and tourists who find this very spiritual or sacred, visit Dharamshala in search of peace.

With numerous monasteries making the town famous among travellers, it is a must-visit hill station. It is defintely one of the best places to visit near Delhi in April.

The term Spiti means “middle land” and Spiti Valley actually refers to the place in between Tibet and India.

Spiti Valley is a desert mountain located on the Himalayas. Known for its old and ancient monasteries, the Spiti Valley is among the least explored places in the country.

The rough valleys of white snow, the peaks of the tall mountains create a splendid view for the tourists. You can enjoy the magnanimous desert of snow while enjoying the beautiful and authentic delicacies.

Popular among the Hindu devotees as a sacred place, Hrishikesh has been mentioned numerous times in our epics.

Many saints and sages have believed the hill station in search of solidarity and higher knowledge, located on the Himalayas, the holy River Ganges flowing through it.

There are numerous temples build on its banks. Numerous devotees visit here to do penance and commit to tranquillity. If you visit Rishikesh, you are bound to attain a cosmic connection with your inner self.

Recommended Read Top 8 Things To Do in Rishikesh

Jaipur – The Pink City of India

Located at a distance of about 268 kilometres from Delhi, Jaipur is the largest city of Rajasthan. Jaipur has been designated by UNESCO as “The pink city”, and it houses two UNESCO World Heritage Sites, Jantar Mantar and Amber Fort.

Ranked as the seventh most places to visit in India, Jaipur attracts numerous tourists every year owing to its beauty and strategic location. The city is also designed wonderfully and has many temples, forts, palaces and other monuments.

Mussoorie – Queen of the Hills

Located at a distance of about 290 kilometres from New Delhi, Mussoorie is known as the “Queen of the hills” owing to its beautiful landscapes, valleys and slopes. It is situated at an elevation of 6,578 feet and in its backdrop lies the Doon Valley and the Shivalik Ranges.

The mountains remain snow-capped and attract numerous visitors with varied adventurous sports like mountain climbing, trekking and hiking being some of them.

Happy Valley, Dhanaulti, Camel’s Back are some of the beautiful landmarks in Mussoorie to explore.

Known to be one of the seven holy places for Hindus, Haridwar is the largest city of Uttarakhand that excels in tourism, owing to its numerous temples.

Haridwar is located at the base of Himalayas and at the confluence of River Ganga and River Chandravanga. As a result, it is considered to be a holy city.

Loosely translating to “gateway to Lord Vishnu”, Haridwar is thought to be the place where “Amrit” fell while it was carried to heaven by Garur. Thus, numerous devotees visit the place to take a spiritual bath or dip in the Ganges.

Also read 6 Unexplored Places in Haridwar That You Must Visit

Considered to be one of the most famous hill stations of the country, Nainital is located in Uttarakhand on the Himalayas. With the backdrop of the Kumaon Ranges, Nainital is named after the landmark Naina Lake around which the hill station is located.

The town is home to numerous buildings with ancient medieval history and popularity. It also has a rich flora and fauna that makes it famous among wildlife enthusiasts.

Peora is a small village located near the famous Mukuteshwar and is situated on the foothills of the Himalayas.

The small village is famous and considered to be a spot for eco-tourism due to the thick blanket of green on its slopes. It also has forests of oak bordering its periphery.

With numerous orchards and greeneries flourishing in the area, Peora Valley has become one of the famous attractions near Delhi.

Also read 14 Popular Places To Visit Near Delhi in May

Ajmer – Where Prayers Are Heard

Surrounded by the magnificent Aravalli Ranges on its sides, Ajmer is situated in Rajasthan. With rich history linked with the Mughal Kings, Ajmer is a famous tourist spot. It is home to numerous beautiful forts, palaces, sculptures and obviously the famous Ajmer Sharif.

Ajmer Sharif is a shrine dedicated to the Sufi saint Moinuddin Chisti. It is visited by numerous people every day irrespective of their caste, religion or creed.

It is believed by the pilgrims that their prayers would be answered and you can enjoy the Sufi aura that the shrine holds.

Named after the renowned hunter and naturalist Jim Corbett, it is located in Nainital and Pauri Garhwal district in Uttarakhand and is immensely popular among tourists and nature lovers for its diverse flora and fauna.

Jim Corbett is one of the most popular Royal Bengal Tiger reserves in India and is also the first to be included in Project Tiger.

One of the popular places rich in wildlife, Jim Corbett National Park is an epic place to witness.

One of the famous landmarks of India, Amritsar is located in Punjab. It is the famous pilgrim site for the Sikhs. It is home to the world-wide famous Golden Temple. The Golden Temple consists of the shrine of Guru Harmandir Sahib.

The beautiful architectural piece has its dome covered with gold. Being a place of rich and colourful culture, numerous worshippers visit the temple every day in search of solace and blessings.

Considered to be the most sacred and holy place for Hindus, Vrindavan is the city of temples. It is believed that Lord Krishna spent a large part of his childhood in this town.

Thus, there are numerous temples built dedicated to the Lord and Radha. There are few temples dedicated to Lord Vishnu and Lord Shiva too.

Known to be a heritage site of the country, Vrindavan offers peace to its visitors. It was believed to be re-constructed by Mahaprabhu Shri Chaitanya after he wanted to locate Lord Krishna’s life.

There are numerous temples dedicated to Krishna and Mahaprabhu, which brings positive vibes in everyone’s lives.

Sultanpur Bird Sanctuary also is known as Sultanpur National Park and is located in Gurugram district in Haryana, at a distance of about 50 km from New Delhi.

A host to over 100 species of migratory birds from all over the world, this bird sanctuary is a paradise for bird lovers and bird watchers.

Hope you liked this article on the best places to visit near Delhi in April. Do share your views with me in the comments section below. If this article was helpful, do share this post with your friends on Facebook and Twitter. It would mean a lot to me.