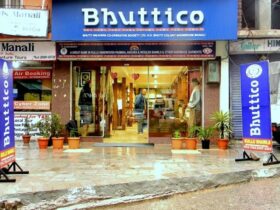 5 Popular Places for Shopping in Dalhousie

Qutub Minar- A Complete Guide. Busy schedule, monotonous life and immense pressure in work-life often create boredom and negativity. Nothing serves as a better escape than travelling. Taking a holiday to the famous and extravagant locations adds positivity to life and serves as a source of knowledge.

Known as one of the signature structures of India, Qutub Minar is an archaeological gem that attracts tourists from all over the world. It is a minaret and is a UNESCO World Heritage Site and is thus an important piece of architecture of India.

Qutub Minar was started to be built in the year 1199 by Qutubuddin Aibak and the minaret was named after him. Located in the Mehrauli district in Delhi, Qutub Minar is one of the pristine spots of India.

The minaret is a victory tower that was built after Delhi’s last Hindu Kingdom was defeated. It forms an integral part of the Qutub Complex in Mehrauli, which consists of Iron Pillar, Alai Darwaza, Ala- ud-din’s Madrasa and Tomb, etc. the building was constructed to celebrate the commence of Muslim rule in India.

Today, a festival known as the Qutub Festival is held here, annually, where artists, singers, and dancers gather from all over the world to celebrate art and history.

Soon after the defeat of the last Hindu Kingdom in Delhi, Qutubuddin Aibak started building the minaret in 1199 and completed the first storey. After his death, his son-in-law, Shamsuddin Iltutmish added three storeys on its top. In 1369, during a bolt of massive lightning, the top storey was destructed.

Later on, Firoz Shah Tughlaq renovated the fourth storey and added one more on top of it and thus completed the present structure. In 1803, during an earthquake, the Minar was heavily damaged.

It was renovated by the British Indian army who later on built a cupola on the fifth storey. Sher Shah Suri added an entrance to the Minar. The Qutub Minar is 238 feet in height. The base itself forms 47 feet and the topmost storey is 9 feet.

The monument was built on the ruins of Lal Kot and numerous Hindu and Jain temples, whose ruins were later on excavated from the site. Qutub Minar finds resemblance with the Minaret of Jam in Afghanistan which is made completely of brick and is 62 meters in height.

The Architecture of Qutub Minar

With a height of 238 feet and a spiral staircase, the Qutub Minar is an epitome of marvellous architecture. It is a blueprint, following which most future minarets were built. It comprises of 5 storeys that are superimposed on one another and built by different rulers using different materials.

The first storey has numerous inscriptions praising the ruler Qutubuddin Aibak and all the first three layers are made from red sandstone and are cylindrical in shape.

The three storeys are separated from each other by balconies. The fourth storey is made up of plain marble and appears to be very simple. The fifth layer is the last one and is made of both marble and sandstone.

The tower has flanges made up of dark red sandstones. Inscriptions from the Quran are found all over the piece of architecture. There are numerous decorative elements and intrinsic carvings.

You may also like Red Fort Delhi – Entry Fees, Timings, History and more

The minaret remains open on all days throughout the week. It opens at 6 AM and remains open till 9 PM in night. You can visit anytime during these hours to experience the beauty of this tower.

You can visit the Qutub Minar anytime during the year as it remains open for visitors throughout the year. However, it is advisable that you visit the structure during the cooler months of October to March as the weather during this time remains comfortable.

As the summer gets relatively hotter and the scorching heat creates un-comfortableness, winter months are preferred by visitors.

How to Reach Qutub Minar

As Qutub Minar is one of the important landmarks in the country, it is easily connected via air, road, and rail.

The nearest airport to Qutub Minar is the Indira Gandhi Airport. Being the airport of the capital city, it is well connected with all the important cities of the country as well as other countries. After you reach the airport, you can book a cab or hire a taxi and reach the Minar.

The nearest bus stop to Qutub Minar is the Akashmiri Gate Bus Stand which offers a ride to and from all the neighboring cities.

Old Delhi Railway Station is the nearest railway station to the Qutub Minar. You can take a bus or a cab to reach the monument.

The nearest Metro station is the Qutub Minar Metro Station.

Nawab Safdarjung was made the Prime Minister or Vazir during the rule of Mohammad Shah Ahmed Shah. After his death, his son built the tomb to commemorate him.

The mausoleum has a central tomb and is reddish-brown and white in colour. One can find four fountains on the four corners of the tomb. There is a mosque inside the premises and the dome has eight partitions. There is a centrally placed cenotaph.

As the name suggests, the building resembles a fully bloomed lotus. It is made from white marbles and has 27 independent structures that appear like petals.

It is an Arabian House of Worship but is open to all visitors regardless of their religion. Once considered to be the most visited building in the world, the Lotus Temple has 9 sides that lead to a central chamber.

The Garden of Five Senses

Located opposite to Saket, the Garden of Five Senses is a park that is one of its kind and a must-visit if you are planning to visit the Qutub Minar.

The park is built on rocky terrain and as the name suggests houses numerous sections designed to boost our senses of touch, smell, hear and see. The sun clock, bell tree, the structures of elephants, children praying is a must-see that is bound to enrich your senses.

Considered to be one of the jewels of Asian architecture, the Qutub Minar has been a part of numerous literature and movie scenes. It is visited by numerous tourists every year, who enjoys the view of the tower. Standing tall after witnessing so much of rich ancient history, the Qutub Minar is a must addition to your bucket list.